At this very moment in Spain, with gazpacho season behind us and the days getting shorter, someone is pricking chorizo for Asturian fabada (slow-cooked pork and beans), simmering fish fumet for Basque marmitako (tuna stew), and sautéing sofrito for Manchegan caldereta (wine-braised lamb). Me? I’m in my slippers boiling pig blood and chopping chocolate for one of Iberia’s most peculiar—and tastiest—stews: Catalan civet.

Civet (pronounced see-VET) is an ancient dish hailing from the Pyrenees Mountains on the French-Catalan border. To make it, cooks soak meat and vegetables in wine, often for days, and then stew them in their own marinade until spoon-tender and intoxicatingly fragrant. If you’ve tasted coq au vin or boeuf bourguignon, you’re familiar with the genre, but there are some key differences between civet and your standard winey braise.

When our plates plonked down, we exchanged uneasy glances: Before us lay brown, gloppy mounds with nary a fleck of parsley in sight. This was mountain food, I thought, uncensored. Then I inhaled. The smell of wine, rosemary, and some mysterious earthy spice tickled my nostrils, sending my salivary glands into overdrive. With the faintest nudge of a fork, the meat disintegrated into the thick, mahogany sauce which cloaked every savory bite. Yet as I squeegeed the plate clean with bread, I still couldn’t shake the question: What was that spice? Almost on cue, the waiter sauntered over, grinning. “The secret ingredient is chocolate,” he said.

Chocolate? in a traditional stew? deep in the remote Pyrenees? His answer sent me down a civet rabbit hole of recipes and lore from which I have yet to emerge. See: slippers; pig blood.
To get the skinny on civets, I first dialed up Jaume Fàbrega, Catalan food scholar and author of 50-some culinary history books including La cuina del Pirineu català, about Pyrenean-Catalan cuisine. The term civet, he explained, is likely a few centuries old, but people have been making wine-based stews in Spain since at least ancient Roman times. “Marinating meat in wine makes it softer and more flavorful and extends its shelf life,” he said, adding that nearly every Mediterranean culture has its own wine-based stew.

Civet is hearty and nourishing after a hike in Aigüestortes i Estany de Sant Maurici National Park. Benjamin Kemper

In the Catalan Pyrenees, where wild game meats like roe deer and boar are a dietary mainstay, the technique was particularly handy: An overnight bath in wine helped mitigate tough textures and sharp odors. Fàbrega reminded me that, “until the 1950s, we’re talking bear and badger and whatever else was scurrying around, in addition to the usual venison, wild boar, and hare still cooked in civets today.”

Era Coquèla’s chef, Marc Nus, makes venison civet the old-school way, but he likes to invert the standard stewing order of operations for less feral, more delicate meats. To make quail civet, for instance, he simmers (unmarinated) fowl with wine and aromatics. When they’re fall-off-the-bone tender, he refrigerates the birds overnight in the sauce to let the flavors fully penetrate the meat, almost like an escabeche. “It’s one of our most popular dishes,” he said.

Though civet is synonymous with game, there are no hard-and-fast rules when it comes to its ingredients, except, perhaps, that some type of allium must be involved; “civet” is believed to come from an Occitan word for onion. In fact, a Google search turns up hundreds of recipes for civets made from beef, chicken, pork—you name it, someone’s probably civet-ed it. Across the French border in Languedoc, they even make civet with lobster, its sauce enriched with syrupy Banyuls wine and the crustacean’s coral and blood.

Blood is probably what gave lobster civet its name. Historical recipes for civet almost always call for animal blood (pigs’ blood was most common), which was added at the end of cooking for its deep brown color and saline richness—and, importantly, for texture. The albumen in blood is a natural thickening agent and lends a luxurious glossiness to hot soups, as anyone who’s tried Korean seonji-guk, Portuguese papas de sarrabulho, or Polich czernina can attest.

Fàbrega notes that blood would have been absent from civet’s medieval precursors due to religious taboos, and that it was likely added to the dish in the 15th and 16th centuries. The reason is rather shocking. After the so-called Christian Reconquest, when the Catholic Monarchs defeated the Moors and expelled the Jews, Spain’s cuisine came to mirror the anti-Jewish sentiment of the era. Animal blood was not kosher, Fàbrega explained, which suddenly made it a desirable ingredient. The same was true for pork, which is in part why Spanish food is so pork-heavy and why traditionally Sephardic-Jewish dishes like adafina (a chickpea-and-lamb stew) morphed into the treif-heavy cocido madrileño with its half-dozen pork products. 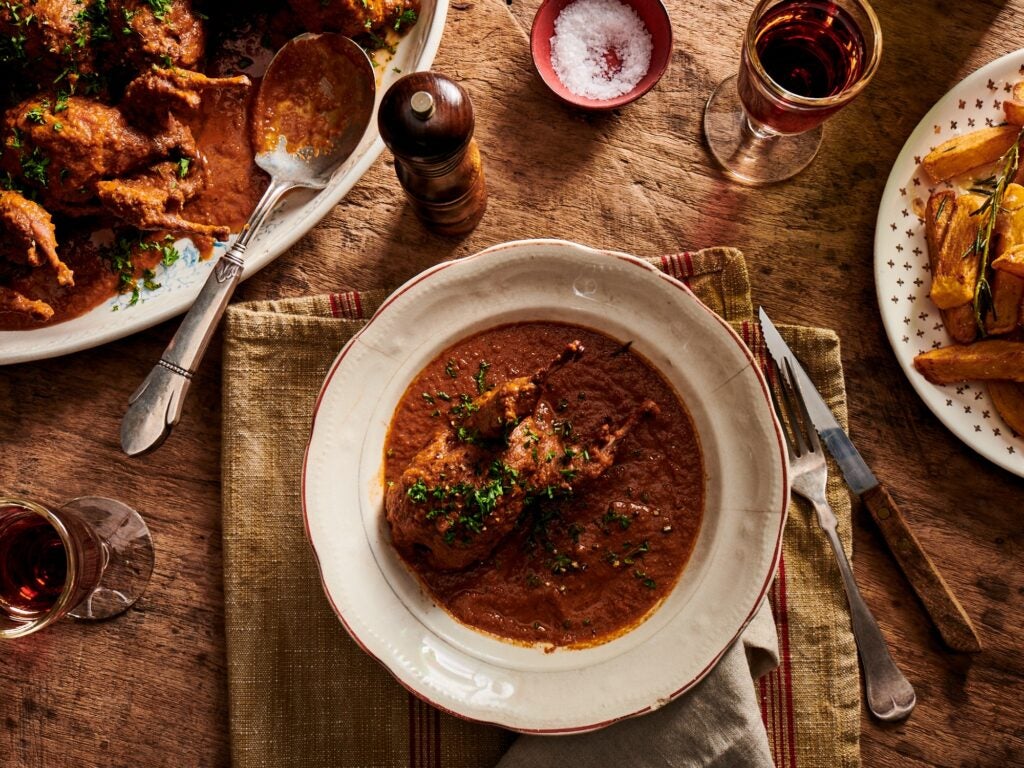 But animal blood is seldom sold fresh these days, and consequently it’s largely disappeared from civet. Marc Nus, the chef at Ela Coquèla, told me that he adds whatever blood seeps out of the raw meat to his civets, but it’s basically a drop in the bucket. Times have changed, and most Catalans now get their meat from supermarkets, not from traditional matanças—annual pig slaughters—in which blood was historically harvested for cooking.
With blood nixed from the ingredient list, how, then, to emulate that velvety mouthfeel and swarthy hue that it imparted? According to Toni Massanés, Catalan food scholar and director of the culinary research center Fundació Alicia, it was only natural that chocolate would be swapped in. “It’s been a pantry staple here for centuries. To my knowledge, only in Catalonia and Mexico do you find chocolate so frequently in savory dishes,” he said. Indeed, Salvador Dalí (who was born in Catalonia) was known to lust after fava beans stewed with marjoram and chocolate. 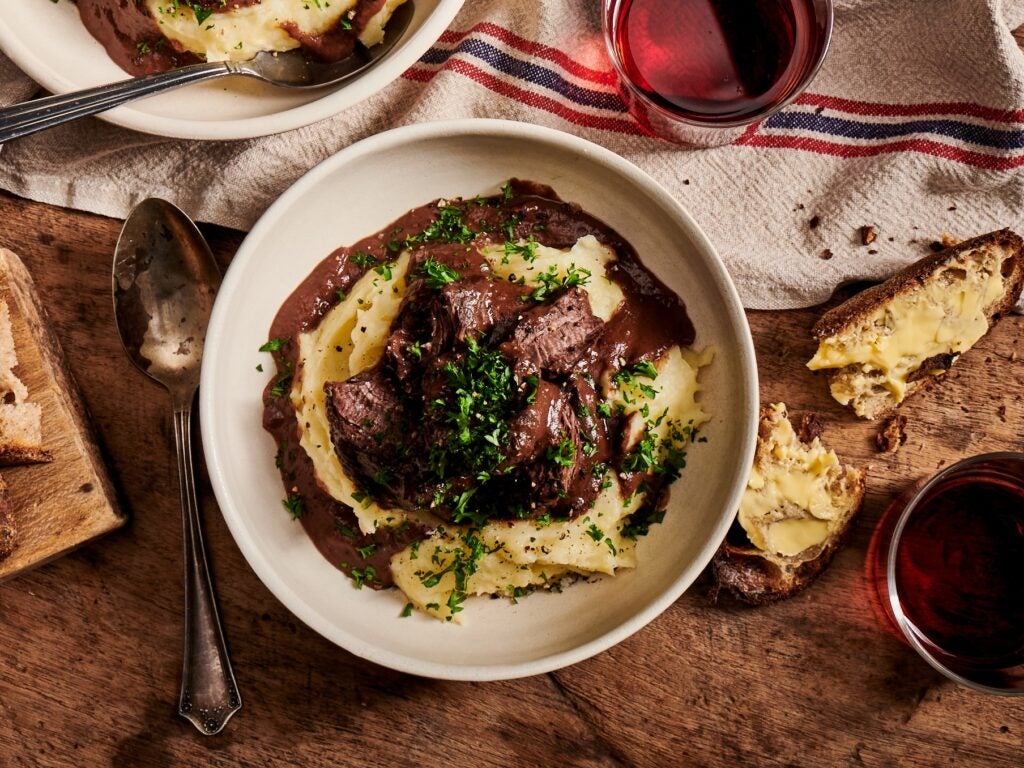 Having learned this history, it was time to put my civet savoir-faire to the test. With Nus’s recipe in hand, I tossed a Bambi’s worth of venison and a pile of chopped veggies into my biggest bowl, poured over two bottles of garnacha, and let it all hang out in the fridge for a couple of days. (“Do not drink! Not sangría!” I wrote on the label; hey, you never know.) Next came the searing and stewing, which filled my Madrid apartment with an aroma so autumnal that a neighbor knocked on my door to ask what I was making. “It smells like my pueblo,” she said, referring to her home village. Just before serving, I blitzed the sauce and whisked in a splash of pig blood (supplied by my plucky butcher; see if yours can track it down) and a few shards of bittersweet chocolate, and watched excitedly as the sauce turned thick and sheeny.

As Marcos and I dug in with smiles stretched across our faces, I recalled a quote by the Catalan journalist Josep Pla, who wrote that the cuisine of a place is essentially its landscape tossed into a pot. And how marvelous it was, to be able to travel back to that wild, pristine mountain landscape, spoonful by nostalgic spoonful.

The Best Chocolate Gifts of 2021 Go Beyond Milk or Dark