For Chopped judge and Nashville restaurateur Maneet Chauhan, Diwali has long been a source of sweet memories—many of them tied to a lavish holiday dessert.

The five-day-long pandenominational holiday takes place during the autumn month of Kartika on the Hindu calendar (early November, this year), and is often called the “festival of lights.” This nickname refers to the shining diyas, or lanterns, celebrants traditionally hang to mark the occasion, which is observed widely throughout the Indian subcontinent and beyond, as family and friends gather to enjoy an eye-popping amount of food, drinks, and plenty of desserts.

Chauhan, who grew up in India, describes the extended feast as an “embarrassment of opulence,” and today, likes to set her own Diwali table with goat biryani, as well as vegetarian dishes like cauliflower and saffron rice. Dahi bhalla—lentil croquettes in yogurt sauce—and chaats are part of the spread, too. But sweets are at the heart of so many South Asian holidays and Diwali is no exception.

One of the chef’s favorite Diwali desserts is gulab jamun, a decadent dish consisting of pillowy balls of fried dough soaked in a rosewater- and saffron-infused syrup. The result has a luscious, almost pudding-like consistency. “It’s a very revered recipe for us.” she says.

Chauhan’s version of the dish deviates from the norm in that she fills her gulab jamun with paneer and nuts before frying, introducing a bit of savory balance and crunch to the otherwise soft and sugary confection. In a recent conversation, I spoke with her about how she developed her riff on the classic recipe, what it means to her, and how home cooks can tweak the dish to their liking. Read it below—and don’t forget to check out the recipe, too.

The following has been condensed and edited for clarity.

Let’s talk about gulab jamun. Can you walk me through the process of how you created this recipe?

So, gulab jamuns are iconic Indian desserts. If there’s a big occasion, gulab jamun is always served, and growing up in India, to me, it was always like, how do they do it? How do they make it? Because it was one of those recipes which seemed very complicated.

So when I got older, I started getting recipes from family and friends. Over the years I tweaked and changed it. One thing I do differently is stuff the gulab jamun—usually it is just a plain donut ball, soaked in a sugar syrup. I also added some warming spices, like star anise and cinnamon. Usually it’s made with only cardamom and saffron.

I also changed the proportion of milk powder. Traditionally in India, gulab jamun is made with khoya, a reduced milk you can buy from the local dessert shops. Getting khoya over here is difficult, so I adapted this recipe so that if somebody cannot get it, they can still make the dish.

For the home cook who may not have all of these ingredients, what are some substitutions that one could reasonably make without affecting the quality of the dish?

Diwali is one of our biggest holidays and gulab jamun is a celebratory dish, so that’s why there are really rich ingredients in it. That being said, you can remove the saffron or the rosewater and the flavor is going to come from the cardamom, the star anise, and the cinnamon. The flavor profile will be slightly different, but that’s pretty much it.

You mentioned that this is a Diwali recipe. When you were growing up, do you have any memories associated with the dish?

When we used to go to our grandparents’ place in Bangalore, there was one place which was known for the gulab jamun, and there would always be a line. We would take our uncle and make him stand for hours in the line to get those gulab jamuns. So it’s a very revered recipe for us, because kids absolutely love it.

One of my favorite combinations—and I think this would go for pretty much the majority of the population in India—is warm gulab jamun with cold vanilla ice cream. Oh my god. I am in heaven with that combination.

Wow. You said that and I just started salivating.

I see a step here that says you should let gulab jamun dough rest for 10 to 15 minutes. There’s no yeast, so it doesn’t have to rise—can you explain why it needs to rest?

There is all-purpose flour in it. So as soon as you start mixing all-purpose flour, the gluten begins to develop. We want that gluten to relax. So when you let it rest, the gulab jamun will not be chewy, but rather more crumbly when you bite into it.

What are some other potential variations that a home cook might make to this recipe?

I think the filling can be completely different. Instead of paneer, you can go ahead and get some dates and nuts, or dried cranberries if you want a little bit of tartness. You can use chocolate ganache. Coconut filling is fantastic in this also, and once I made the gulab jamun with an apple pie filling.

The other variation could also be the sugar syrup. For the holidays, I’ve made it with a pumpkin-spiced syrup. So to me, I always say that a recipe is just a guideline. And I love for people to put their own signature on it and make it their own; that’s when the recipe becomes so much more unique. 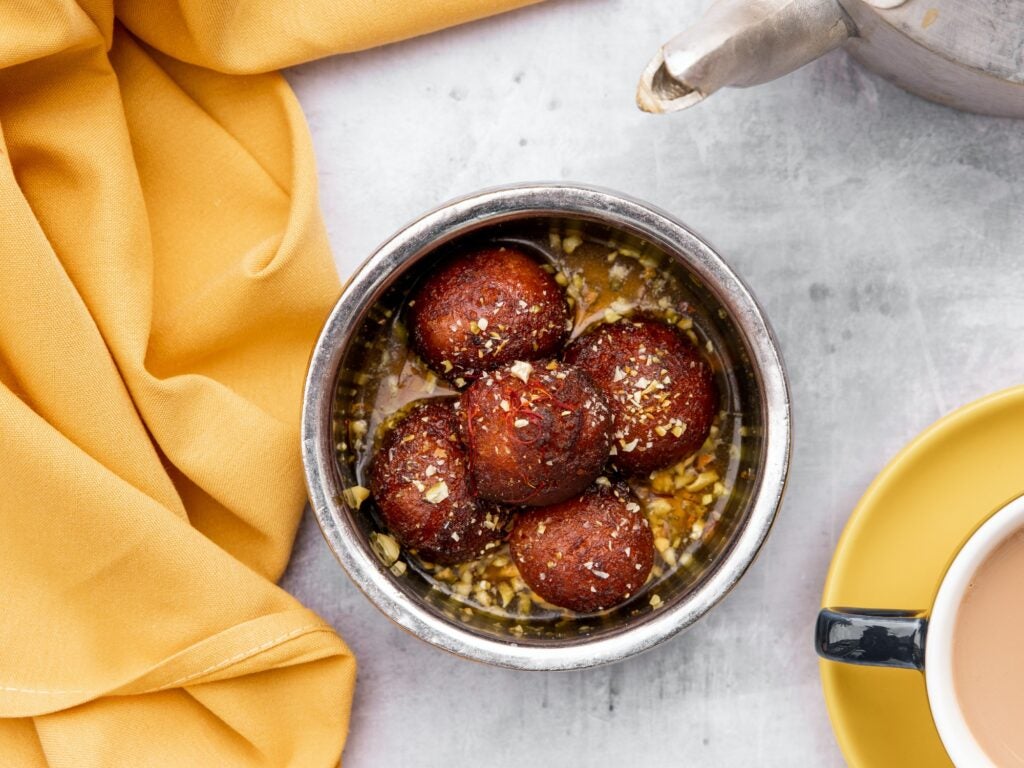