Keep your turkey prep simple, then go crazy with the sides, advises Manhattan butcher Jake Dickson, founder of Dickson’s Farmstand Meats. The problem with Thanksgiving, he explains, is that most people rarely cook giant, complicated roasts like whole turkeys. “It can be intimidating,” he says, “there’s so much pressure, and there’s usually a lot of family watching.”

But even the simplest roast turkey must be carved from the bone—an often-dreaded task that involves attempting to wrangle an enormous, ripping hot bird with finesse. Using a few tricks of the trade, SAVEUR’s go-to meat guy explains his own method for getting beautiful, moist, and tender cuts onto a presentable platter fit for the holiday table.

Gear Up and Reduce the Drippings

When breaking down a turkey, a carving fork is often more trouble than it’s worth. Instead, Dickson suggests using what he and his team call “Mickey Mouse gloves.” Put on a pair of latex gloves, followed by a pair of cotton gloves, then layer on a second set of latex gloves on top of that. “You’re basically making highly dexterous insulated pot grabbers,” he explains. “Then you can grab onto your hot turkey and carve.” Once your hands are protected, transfer the turkey to a wide cutting board.

At this point, you can also start reducing the drippings from the roasting pan right on the stove. (Since Dickson likes to make his gravy ahead of time, he saves the pan drippings for drizzling over the freshly carved meat, ensuring the juiciest possible turkey.)

To begin carving any bird, start with the legs. “I’m mainly trying to take things off the turkey in as large of pieces as possible,” explains Dickson. He recommends using a boning knife or even an ordinary chef’s knife. “It can be cheap,” he says, as long as it’s sharp.

The big mistake people make here, Dickson explains, “Is that you want your knife to fall on the outside of the hip bone.” If it falls on the inside, the knife gets stuck, so he recommends feeling for that bone and making sure you cut down the outside, which allows you to pop the whole leg—drumstick and thigh—off in one piece. “This makes it easier to take off the thigh,” he explains. “Because you have some leverage.”

Rip Off The Wings

Set the knife aside for this part. “I usually just rip the wings off,” explains Dickson. A slow roast tends to soften the connective tissue which attaches these comparatively small parts to the body. Grip the wings close to the carcass, twist to loosen, then remove.

Slice Off The Breasts

The traditional “Norman Rockwell” carving method involves slicing the bird’s breast along the grain, but according to Dickson, “that’s not how you get tender meat.” Instead, for the best texture and flavor, he recommends taking the entire breast off the bone and then slicing it against the grain.

To do this, run a boning knife along the breastbone while your non-dominant hand lifts the meat away from the carcass. Repeat on the other side. Slice each breast crosswise and on the diagonal and transfer the tidy slices to a warm platter.

Once the breasts, wings, and legs are removed, the hardest part of carving the turkey is finished—and the fun part begins. Go through and just pull any remaining bits of meat still hanging onto the bird’s carcass—the “cage” as Dickson calls it. “You’ve got all the little pieces still on there. I just go back through and pull them all off.” He also suggests taking some of the skin (his favorite part) and chopping that up with the rest of these tasty morsels. 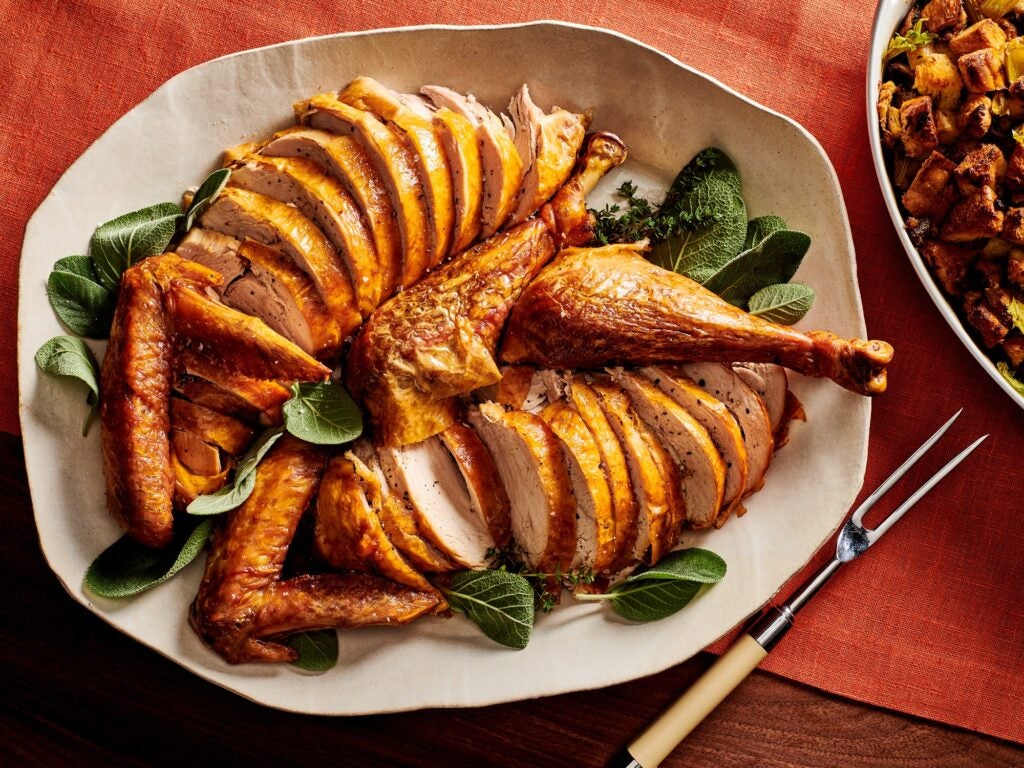 Dickson prefers to serve the wings and the drumsticks whole, because they don’t yield enough meat to serve to multiple people, and because the lucky individuals who get them will get more meat by eating straight from the bone.

Use your knife to hack off as much meat as you can from the thighs so people can share those bits. “It never comes off pretty, so I just kind of go for it,” Dickson says.

Finally, taste the meat, season lightly with a bit of kosher salt as needed, then arrange it all neatly on the platter. Drizzle the reduced pan drippings over the turkey, focusing mainly on the white meat, then serve warm, with all the fixings on the side.

The Origin and Art of Japanese Rice

The Best Kitchen Knives, According to Our Test Kitchen
Scroll to Top