My family’s Thanksgiving table always had the familiar taste of homemade kimchi, often made with gochugaru that our relatives sent us from South Korea. Turkey, in fact, never entirely felt like the main event to me. We immigrated to America when I was 10 years old, and though my mother and grandmother were wonderful cooks, they weren’t very familiar with how to prepare the whole bird. It frequently turned out dry, but we felt obliged to make it anyway; after all, this was one of the most important holidays in our adopted country, and turkey was supposed to be the showstopper in the spread.

Still, my family didn’t hesitate to tailor the standard Thanksgiving menu to our palates. Alongside our dry turkey and cranberry sauce from a can, we’d serve Korean favorites like kalbi-jjim, or braised short ribs, and japchae, a glass noodle dish—always with a big helping of the kimchi. Our table, like those of many American immigrant families, was a mishmash of both familiar foods from our home country and traditional recipes that were new to us—a fusion of two cultures. Bringing Korean influences and ingredients into the meal helped us feel like the holiday was a celebration that included us.

That spirit of exploring, and mixing, different cooking styles went on to inspire me as a professional chef. In Brooklyn, I opened the Korean restaurant INSA, rebooted the historic oyster and chop house Gage & Tollner, and folded Korean accents into contemporary American dishes at The Good Fork (since closed)—where I developed my own riff on braised short ribs that wound up becoming a local favorite.

The recipe is a nod to kalbi-jjim while also applying French braising techniques, which often involve braising meat in wine to introduce greater depth of flavor. In Korean cuisine, tough cuts are generally boiled to break them down and yield juicy tenderness, with soy sauce bringing a hit of umami and sugar lending subtle sweetness. These two versions of what braising entails merge beautifully in the short ribs, and I’ve come to firmly believe that red wine and soy sauce can and should coexist—just like the at times unexpected assortment of dishes and people that make their way to the table over Thanksgiving and somehow meld in the warmth of togetherness.

Though it was the globally influenced holiday meals of my childhood that initially sparked the idea for the recipe (and though I regularly brought versions of this dish to Friendsgiving gatherings before I was married), I don’t prepare ribs on the big night anymore. For the past 20 years, my husband and I have spent Thanksgiving with his family. They are amazing cooks and prepare all the greatest hits—stuffing, green beans, wild rice salad, sweet potatoes with marshmallows, and of course, a moist and delicious turkey. We don’t tinker with their formula—and for the night off from cooking, I’m grateful. Whatever your table looks like this year, I hope it’s filled with the comforting flavors of the places you think of as home.

As told to Megan Zhang 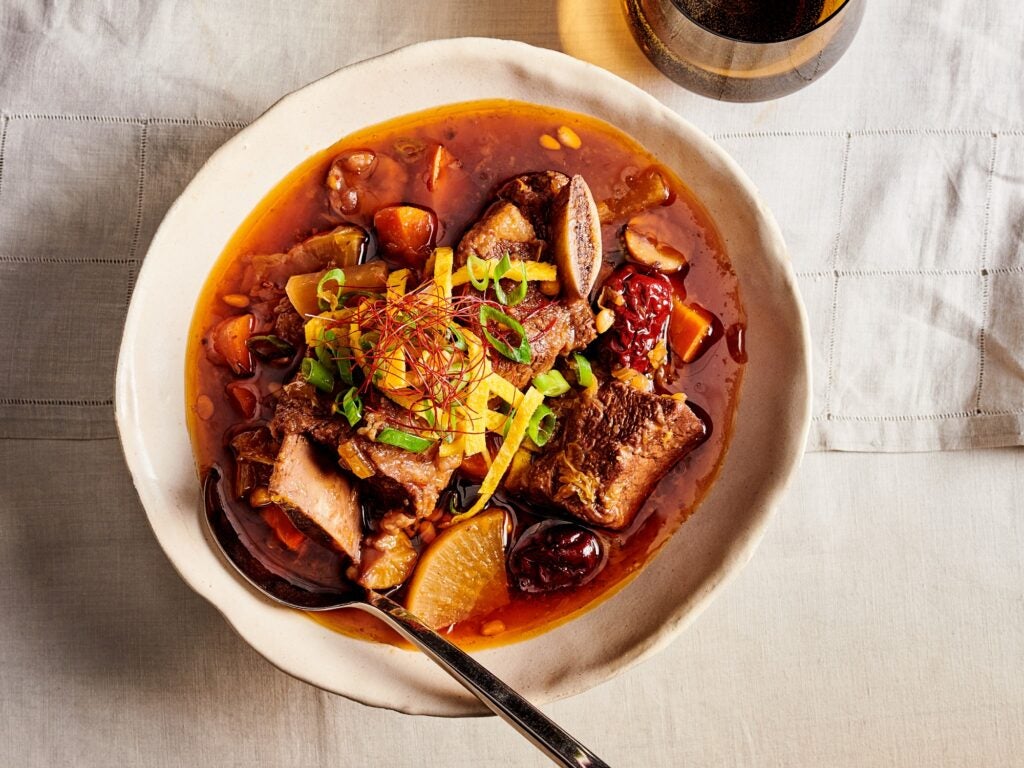