In the beginning, there was tamarind.

Originally carried to the subcontinent from Africa by traders, its name alone is emblematic of its deep roots in India—drawn from tamar-i-hind (“the fruit of India”) and so-called by early Arab traders possibly “because of the brown fruit that resembled dates,” write Harini Nagendra and Seema Mundoli in their book Cities and Canopies: Trees In Indian Cities. Almost as quickly as it arrived, tamarind became intimately and irrevocably tangled in the country’s cuisine.

Scroll all the way back to the Sanskrit Brahma Samhita scriptures of 1,200-200 BCE and you’ll glimpse mentions of the tamarind tree. Hopscotch ahead a few centuries into the Common Era, and Indian food historian K. T. Achaya notes that rice dressed in tamarind had already become a regular dish in the southern parts of the country. Dip into the 15th century recipes of the Ni’matnama—a cookbook of Ghiyath Shahi, Sultan of Mandu (now Madhya Pradesh), and his son, Nasir Shah—and one entry in particular intrigues: a royal recipe for rice and meat spiked with nuts that have been barbed by a dunk in tamarind syrup. Mughal emperors, who reigned over swathes of northern and central India from 1526 to 1858, favored the tree for its dense shade and planted many to provide weary travelers with a pleasant place under which to stretch out.

This love for tamarind extended even to visitors to the country. The Portuguese physician and herbalist Garcia de Orta, who lived and worked in Goa (a Portuguese territory at the time), published a treatise in 1563, Colloquies on the Simples & Drugs of India, which yields an entire effusive chapter on the plant, noting, “I believe that tamarind is a very good digestive and purgative, very pleasant to the taste.” In 1878, Arthur Robert Kenney-Herbert—a British colonel stationed in (erstwhile) Madras who would later return to London to start a successful culinary school—penned the verbosely titled Treatise in Thirty Chapters on Reformed Cookery for Anglo-Indian Exiles Based Upon Modern English and Continental Principles with Thirty Menus For Little Dinners Worked Out in Detail. In the book, he praises the locally-made tamarind chutney and goes on to offer a recipe for a tamarind conserve—“pound together one table-spoonful of tamarind pulp and one of green ginger, season it with salt, a tea-spoonful of minced green chilies, and one of mustard seeds roasted in butter; mix thoroughly and serve.” The British became acolytes of the fruit in unexpected ways, too; their iconic brown sauces, HP and Worcestershire, are both fed by it.

So obdurately has the plant fastened itself into India’s culinary canon that Achaya notes in his Indian Food: A Historical Companion that the Tamil word for tamarind has become the general word for sour in the language: puli. Unsurprisingly, India is now the largest producer of tamarind in the world.

Even today, every part of the tree is valued. Shucking off its brittle carapace reveals seeds caped with a sour-sweet sticky pulp, sometimes eaten as is; sometimes chunks are divested of their fibers and seeds, softened in hot water, then sedulously mashed and strained. The leaves are transformed into chutneys, chopped into chapati dough, and added to sambar. “Mangaloreans even have a traditional recipe for roasted tamarind seeds (pulinkote), eaten after removing the hard coat,” write Nagendra and Mundoli. “Be careful if you try this at home—this requires strong teeth and you may crack yours if you are not careful.” (For those who would rather not damage a molar or dedicate hours to prep, ready-made pastes, powders, and concentrates are also easily found in stores.)

But perhaps the most quotidian ingredient is the pulpy part of the fruit. Tamarind and date chutney form the heart of most chaat dishes—pani puri, bhel, ragda pattice, aloo tikki and mashlamuri. In Eating India: Exploring a Nation’s Cuisine, writer and food historian Chitrita Banerji recalls making a detour with her friends on the way home from school to frequent two street-food purveyors. “One served the quintessentially Bengali snack, mashlamuri. Puffed rice (muri) was expertly tossed up with finely chopped onion and green chillies, roasted brown chickpeas, tiny pieces of coconut, mustard oil, salt and a swirl of thin tamarind paste. The man had an uncanny sense of proportion and knew exactly how much to make for four or five or six customers. Once the mixing was done to his satisfaction, he poured out the mashla-muri into paper cones-filling each right to the brim-and handed them to us. We resumed our walk, munching happily, eyes watering from the chillies, noses quivering with the sharpness of the mustard oil, tongues shivering from the intensity of tamarind.”

Maharashtrian pantries give pride of place to tamarind (chinch) and jaggery, spooning them into dals such as the chinch-gulachi amti (tamarind and jaggery dal). In Pangat, Saee Koranne-Khandekar’s cookbook about the flavors of Maharashtra, she writes that the fruit is used to balance the “flavors and mouthfeel of itchy foods such as colocasia and yam.” Often, it is sunk somewhat invisibly into the Parsi dhansak dal, affording a mellow frisson of brightness, rather than a complete conquest of the dish.

Its boisterousness scythes through South Indian dishes such as sambar, rasam, Pondicherry-style fish curry and Mangalorean pork curry. Archana Pidathala, in her cookbook Five Morsels of Love, speaks to how integral even a dip of tamarind is to the cuisine of Andhra Pradesh, likening it to having salt in the pantry, “Every morning Ammama would soak a large, lime-sized ball of tamarind in warm water, before sitting down to enjoy her tumbler of South Indian filter coffee. This was her daily routine, even before the menu for the day was decided,” she writes.

Its more freewheeling iterations have found their way into Mumbai restaurants such as Bombay Canteen, which dresses crisp-fried colocasia and green radish pods with tamarind and yogurt, and into cookbooks such as Nik Sharma’s recent The Flavor Equation, which elevates a plain tomato soup with tamarind, chile powder, sugar, and peppercorns, and suggests serving a tamarind chutney over fresh or grilled fruit served with sweetened crème fraîche for dessert.  At home, I often lend brio to my salads with a slick of tamarind chutney—this, especially for a sallow mung bean, tomato and cucumber salad, with a crumble of peanuts crisp from the pan. This is more snack than supper though, so for something more filling, the chutney also works well when painted over grilled, spiced chicken as a glaze. You might even trade the poultry for vegetables; its bite will counter the blandness of stir-fried carrots and pumpkin. Anything really, that begs more forthright flavoring or even a gentle shiver of sour. 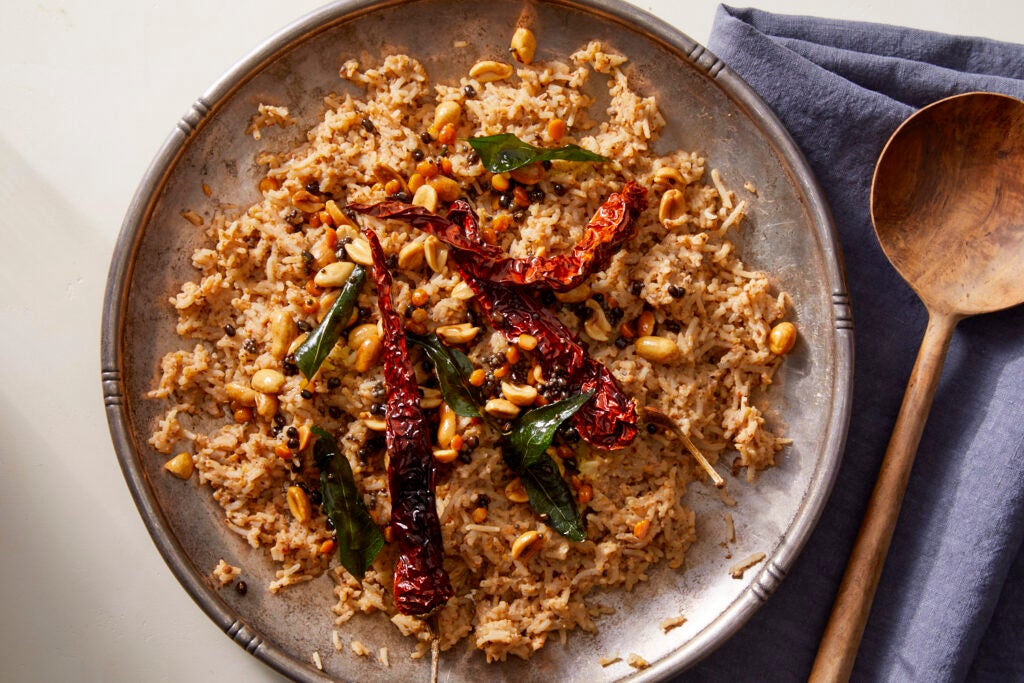 Why Maraschino Cherries Can Actually Be Deadly Deliciousness